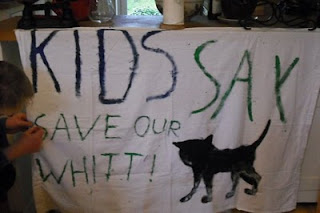 My children were up early on Saturday morning making banners. I was supposed to be preparing my speech for the rally but I ended up on my hands and knees on the kitchen floor painting a black cat on my daughter's banner (James pictured here putting the finishing touches with a needle & thread). Then off to Highbury Corner in the rain..


It was lovely to see so many different people on the march - people from local churches & mosques; from community groups like the Highgate Society; and lots of local residents of all ages from 0 to 104. The Routemaster and the lovely jazz band gave the march a bit of a carnival atmosphere.
There's been a hospital at the Whittington since 1473. It's been part of the NHS since the NHS was born in 1948. Two-thirds of its patients are admitted through A&E, so without it the hospital would be decimated. Wards would stand empty and it might well be the first step to total closure.
The proposal to close the maternity unit is equally worrying. It's been rated one of the safest places in Britain to have your baby. On a personal note, wonderful Whittington midwives helped deliver our two sons!
It's great that all political parties locally are behind the coalition to defend the Whtitington(http://dwhc.org.uk/) but we do need to be clear that this proposal is the responsibility of the Government, which is implementing the report of Lord Darzi (a Labour minister) advocating centralisation of health services. Just last week the FT reported that the Health budget has been slashed by £4 billion. Let's take this fight to Government!
Posted by Emma at 15:49