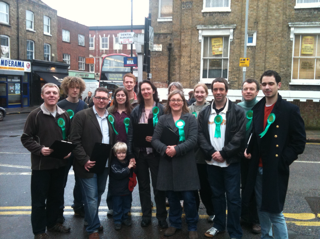 We had a large team out yesterday delivering the new edition of Highbury Green News and we'll be out again today, so look out for it on your doormat.

Thanks to all the volunteers (some of whom are pictured, right) who helped.

Meanwhile, some of us were out collecting even more signatures on our petition to make sure that Blackstock Road, Highbury Park and Highbury Grove are included in the borough-wide 20-mile-an-hour zone.

Given that there are four primary schools, two secondary schools and two important shopping areas on this stretch of road - not to mention the hundreds of people who live here - we're getting great support for our campaign to bring the benefits of safer of streets to this part of the borough.
Posted by Jon at 14:08