A Million Voices for Public Services 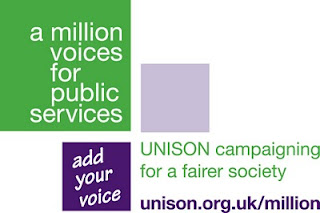 I recently signed up to Unison's excellent campaign, A Million Voices for Public Services. Celebrities including Jo Brand and Ken Livingstone as well as hundreds of ordinary people are speaking up for local public services now - before it's too late.


There are real, credible alternatives to cuts and privatisation of public services - like a Robin Hood tax on banks and financial institutions, and measures to make our tax system fairer by ending tax avoidance by the very wealthy. Economists and the IMF are warning that large cuts now could push the economy back into recession. And Britain is one of only two G20 countries which is not planning a fiscal stimulus - investment in job creation to boost the economy - this year. In France for example, the government has set up a huge investment fund to stimulate the growth that can bring jobs. And we in the Green Party have set out our plan for creating a million jobs through investment in renewable energy, housing, public transport and social care.
We're already seeing threatened cuts to local health services at the Whittington. But cuts could hit people performing all kinds of other vital local public servies, from lollipop ladies to police community support officers, from school cooks to hospital porters. Please add your voice to Unison's campaign today!
Posted by Emma at 12:29