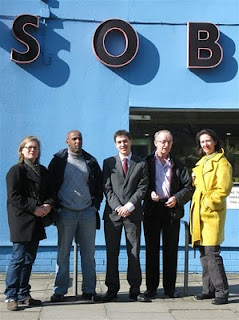 I must admit it's taken me a while to get round to blogging about our day with Cllr Adrian Ramsay, the Green Party deputy leader and one of our hopes for gaining an MP at the General Election (in Norwich South). He came down last Friday to see what we'd been up to here in Islington after hearing Caroline Lucas's praise for Cllr Katie Dawson in her speech to conference.

One of the places we took Adrian to visit was the Sobell Centre. Our Don't $ell the $obell campaign is fighting to keep the whole Sobell site in public ownership for sport and recreational use, against the wishes of both Labour and Lib Dem councillors. The Sobell is also where some of the programme of free sport for Islington's teenagers - another initiative by Cllr Katie in last year's budget - happens.

After the Sobell, it was off for a delicious lunch - soup and cheese toasties at Good for Food on the Blackstock Road.

Huge thanks to Adrian for coming down - and we all enjoyed listening to him on The World at One a few days later talking about the high-speed rail link!