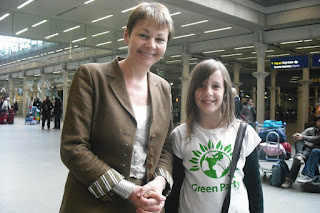 Shortly before Caroline Lucas was elected as the Green Party's first ever MP, the Fawcett Society ran a campaign called "What about Women?" highlighting the importance of women's issues in the runup to the general election. (See Green Highbury, 17 April 2010).

After two years of coalition government, there is, sadly, little for women to celebrate. An article in today's Guardian comments that

"This marks the first era in living memory that British women's freedoms
have gone into reverse, as women pay the heaviest price for government
policies."

Fairness and equality matter not just as important principles, but because a fairer society also means a happier, healthier, and more successful society. Groundbreaking research by the Equality Trust shows that improving equality leads to reductions in violent crime and mental illness; improved life expectancy; and better social mobility.

As the only party with a female leader, the Green Party has shown that we put our principles into practice.

Earlier this year, the Fawcett Society called a day of action to deliver a clear message to the coalition Government:

The vital work of the Fawcett Society and the Equality Trust, as well as Trades Unions such as Unison, to secure the rights of women continues. Indeed, it is now more important than ever. We in Islington Green Party are proud to support them ... and we'd like to wish all our readers a very happy International Women's Day!
Posted by Emma at 15:00