Why Clissold Park needs a Cafe for All (and why it matters!) 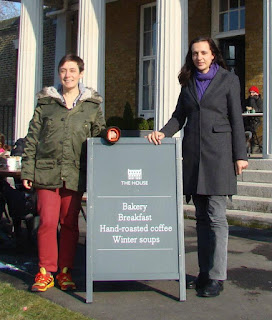 What does the Stephen Lawrence inquiry have to do with the recent row over the decision to award the contract for Clissold Park cafe to multi-million pound
catering company the Company of Cooks? At first sight, very little - but bear with me...

If, like me, you live on the Islington/Hackney borders, Clissold Park - and its cafe - may well be a big part of your life.

The park cafe is unique. It isn't just another eaterie (trendy or otherwise) catering for local residents who care to go there. It provides somewhere for those who don't have a garden to go in fine weather. Somewhere children can play outside without parents worrying about the traffic. And a sociable community space for those who don't get out much. Long-time residents will remember the endless chess games that used to take place on the cafe terrace over one small cup of coffee...

So when the Council recently carried out a £9m refurbishment using funding from the National Lottery, the future of the cafe was a hot topic for many local residents. What would be on the menu? What would it cost? Would it still be a place for local teenagers to hang out after school, for parents and carers coming in out of the cold after a long stint in the playground, or for pensioners popping in for a cup of tea and a chat?

Sadly, things started to go wrong when Hackney's Labour Council took the decision that only companies with an annual turnover of £1m or more would be eligible to bid for the contract to run the new cafe. This extraordinary decision to exclude local businesses has never been properly explained by Hackney Council. The suggestion that only those with this level of turnover are 'financially viable' or have 'relevant experience' is, frankly, insulting to smaller businesses. Smaller local businesses were rightly furious at being excluded in this way - and the decision set the scene for what was to follow.

Then came the award of the contract to Company of Cooks, who describe themselves as a "private and corporate catering company" who "cater for all events at prestigious venues for that special occasion". They do the catering, for example, at Kenwood House in Hampstead.

The reopened Clissold Park cafe featured "waiter service" and menu items such as "cumin roast carrot, cous cous, feta & spiced nut salad" and "orange and lavender cake" - with prices to match. A cup of tea was priced at £1.85: for comparison, a mug of tea in the nearby, and excellent, leisure centre cafe - Hoxton Beach Cafe - costs just £1. Gone were ordinary dishes at ordinary prices. Also disappearing were the dishes featuring other world cuisines - for example, the excellent Turkish food which had featured on the menu at the temporary cafe during refurbishments. And this in the London borough where the majority of London's Turkish community lives.

Many local residents could no longer afford to visit the cafe. And anecdotal evidence (which is all we currently have to go on) suggests the previous diverse mix of customers from all Hackney's communities has been replaced largely with those who are white and affluent.

This was, as GLA Candidate and Hackney Green Caroline Allen commented after visiting the cafe-

"A missed opportunity to have a real community cafe".

So - what went wrong? I believe the answer is actually quite simple. Hackney Council should have thought about who was currently using the cafe. It should have considered the needs of all sections of the community before awarding the contract for the cafe. It should have consulted the whole community (teenagers, older people, parents, those living in social housing, those from different ethnic backgrounds) about its proposals for the cafe. And it should then have required the contractor to provide something for the whole community in running the cafe.

This isn't just good sense - it's what the law requires. Under the Equality Act 2010, Hackney Council was obliged to assess, and then to have regard to, the diverse needs of the communityin taking decisions about how to run the park and the cafe. So far as the Green Party has been able to ascertain, the Council failed entirely to carry out these duties before awarding the contract in this case.

The legal duty concerned (the 'public sector equality duty') was introduced by the Race Relations Amendment Act 2000, following a recommendation in the Stephen Lawrence inquiry report. So now you know....

PS We've been campaigning since the cafe reopened in January, and it seems from recent announcements that we have made some progress. As you can read here and here, the cafe management have now made some moves to make the menu 'more inclusive'. This is welcome so far as it goes. But as far as we're concerned the most important thing is this: next time, the Council needs to take account of the needs of all its residents (young and old, rich and poor, black and white) before it makes important decisions of this kind. That is the way to ensure fairness for everyone - and we believe that fair is worth fighting for!
Posted by Emma at 16:21