Update 25th April letter of the week in the Islington Gazette.  Not online so content below. 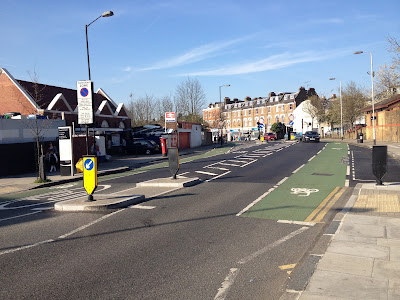 The Council's continued insistence that the layout was put in at "residents’ request" for safer roads is baffling.  There was no prior discussion with residents of the proposed measure either at the Highbury West ward partnership meetings or with the representatives of pedestrians and cyclists.  The council initially described the width restriction design as "innovative" and insisted "it would bed in" and "people would get used to it".


Drayton Park is a wide sweeping and increasingly residential road.  A massive opportunity has been missed to upgrade the public realm, reclaim road space for residents and manage  the very real danger  presented by large lorries using residential roads with a lorry ban enforced by a camera rather than the current width restriction that makes cars swerve dangerously from one side of the road to the other, flipping over with alarming regularity.

The council need to decide if they want a speed control measure or a way of preventing large lorries from cutting through residential streets or both.  The current design does neither effectively and has been to the detriment of the amenity and safety of residents. It is hard to conclude other than that the Council wanted a revenue stream from confused motorists rather than a better designed street. Lorry bans can be enforced without width restrictions by erecting a camera to monitor lorry movements, fining any lorry drivers who ignore the ban.  Speed can be controlled by redesigning streets to feel like places for people rather than highways dedicated primarily to fast moving vehicles.

Islington has the least public green space in London, our streets should be valued as precious public space and every opportunity taken to widen the pavements to deter speeding and make space for planting trees, transforming the roads into a more pleasant place to walk and cycle for the 65% of residents who have no access to a car or van.  This has been a shocking and avoidable waste of council resources.  Highbury needs more people-friendly streets and less of this wasteful "innovation".
Posted by Caroline Russell at 14:17