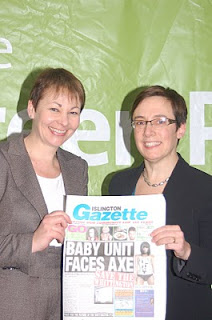 The last few days have been an extraordinary emotional roller-coaster. We've lost a councillor and gained an MP (in Brighton!) And we still don't know who will be forming the next Government or what role the Green Party will play.

In Islington North we obtained the fifth highest Green general election result in London; thank you very, very much to all of you who supported me.

As a first-time Parliamentary candidate, I've had a lot to learn - and loads more that I still don't know. But I've loved every minute of it, and I'm eager to do more.

A few people have suggested it's time for a rest - but first I need to honour a few promises I made in the course of the campaign. One thing I promised was to continue with the community campaign to save the Whittington, holding to account whoever forms the next Government (and the one after that!) So I was there at the DWHC meeting last night brainstorming ideas about how to do just that.